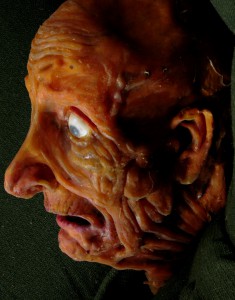 A Chance of Circumstance is an installation that examines the notion of a body that is absent and a mind that is sedated. The viewer enters a space that is occupied by an empty green armchair and an old television set.  When the viewer sits in the chair the television automatically turns on and plays a stop-motion animation about an elderly man trapped in the same green armchair in which the viewer sits. The narrative is set up in a loop with no beginning or end and the action consists of a series of moments that find no resolution. 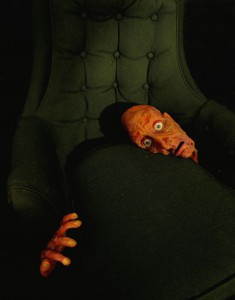 As his body disappears, his only point of contact with the outside world is through his tongue, which he uses like a “feeler” to connect to the physical space around him.  He struggles between his desire to become absorbed by the white noise of the television set, (which he periodically stares at blankly) and stay connected to the physical world from which he is disappearing.   The work is about the isolation of the individual as they absorb themselves into the narrative constructs and images of television; and plays with suspension of disbelief, by creating an uncanny association between the situation of the animated character, and the participation of the viewer.

Click HERE to see a video of the work.